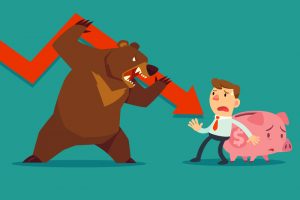 A Bear Market is coming, it’s only a matter of when. It may be quite a while before it arrives, as bears are known to sleep for a long time. Many investors don’t like to think in terms of a Bear Market, defined by a 20% or more decline in the Dow Industrials and other popular averages, but Bear Market declines are a natural and necessary part of the evolution of financial markets. Bear markets shake out speculative excesses and re-price risk back to investable levels.  Without occasional Bear Markets, financial asset prices would be perennially expensive, offering investors little long term value and only marginal opportunity.

The onset of Bear Markets can be caused by a number of factors, but the age of an ongoing Bull Market is apparently, not one of them; as many market veterans like to say, “Bull Markets do not die of old age”. So what factors trigger Bear Markets? Here are four factors that can lead to an eventual Bear Market:

1-Recession: General economic contractions that amount to recessions, (defined as two or more consecutive quarters of negative GDP growth) are usually accompanied by Bear Markets in stock prices.  In recent cycles, these have tended to be global in nature. As centuries of economic history demonstrates, occasional recessions are all but inevitable.

2-Federal Reserve Policy Mistakes: The US Federal Reserve raises short term interest rates too much, tightening credit conditions to the point where many credit worthy borrowers are squeezed out of loan access, triggering a marked slowdown in economic activity and a resulting domino effect on the rest of the economy.

3-An Inverted Yield Curve: This is where short term rates, controlled by the Federal Reserve exceed long term bond yields, which are determined by market forces. When market forces appraise the value of  10 year and longer dated bonds as higher than that of short term instruments, it implies markets expect slow to negative growth, while at the same time the Fed is attempting to slow the economy by raising short term interest rates.

4-Credit Contagion: There has been a monumental expansion in the amount of all forms of debt throughout the global economy in the past ten years. While much of this immense galaxy of debt appears to be bankable for the moment, much of the rest of it, many Trillions of Dollars worth, seems quite precarious and vulnerable to widespread default fears, which can start an avalanche of panic selling which can wreck the entire global financial system as it did in 2008. Global credit markets are already bloated with all sorts of strange and fishy smelling junk debt, especially “Sr. Bank Loans”, lower end Junk Bonds, dodgy emerging markets debt, and a wide variety of complex, incomprehensible derivative forms of credit that can suddenly go bad during any hint of a recession.

The above four are considered the classic warning signs of Bear Markets to come, but may not serve as reliable signals before the fact, as stock prices are often way out ahead of economic statistics, so a Bear Market may be well underway by the time any of these four factors are apparent.

The current economic expansion and accompanying Bull Market in Stock prices began in the 1st quarter of 2009, and is now more than nine years old. Though old age will not kill off the Bull, a pending recession might. The US economy is currently still in expansion mode, but could lose steam if global economies, especially in China and Western Europe begin to slow down, perhaps due to ongoing trade disputes.. Add to that, the growing stresses in low grade credit, and an eventual recession seems ever more likely.

So what can investors do to prepare for a coming Bear Market? In the second installment of this series, we’ll look at ways to protect your holdings from the ravages of a Bear that is still in hibernation, but can awaken at any time. Stay tuned.