Even in Financial Planning, No Escape From Politics 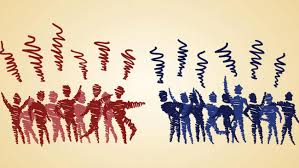 In previous times, traditional Financial Planning and asset management  was usually approached with a certain level of political and cultural pragmatism, which was seen as a practical and straightforward means of achieving financial goals. Whatever one’s politics and or worldview, it was once thought, was not important, the goal of financial success was politically and culturally agnostic. But no more.

Now every form of strident politics and culture conflict are found everywhere in daily life, which includes the individual and institutional financial arena, and many financial entrepreneurs are seeing this hyper political environment as an opportunity.

Ever since the 1990s when we first saw the introduction of “Socially Responsible” mutual funds, culture and politics has crept into financial decision-making. It was the first time progressive-minded investors who did not like oil companies or cigarette makers had a way of making a political statement as well as investing in businesses they approved of. Since then, culturally-based “affinity” investing has been a growing trend which seems to be gaining ever more momentum.

All of these styles have one rather disturbing characteristic in common: They imply that those with other  viewpoints are not welcome. In this way, these politically fashioned financial services seem to be one more aspect of modern life that is designed to divide society into opposing political sides. Now, the once politically neutral practice of investing now crowds us into opposing corners where it is “us against them”; where there is the added distraction of the need to vilify the opposite culture.

None of these culturally driven financial styles intend to do any harm per se; their operators are just attempting to take advantage of the cultural polarization that seems to be ongoing in many places throughout  the world, especially in Western countries. But by corralling clients into political corners that by their nature imply a condemnation opposing points of view, the focus on financial outcomes and the benefits of cooperative free enterprise are lost and replaced with visceral politics.

So what does an individual or institutional investor do in a polarized political environment?

The first thing to ask yourself is if the political statement of affinity financial services and products are part of what you emotionally need to do as an investor. If it is, you’ll have quite a few choices. If not, you will be free of political judgments in your financial plan, making the entire process that much easier.

If however you feel you need to make a cultural statement, then do so, but understand that the politics of your choice can interfere with proper financial decision making. For example, progressive minded investors may be eager to own an investment for its perceived cultural value, such as certain solar energy companies, rather than its actual financial value, which may be much less than the promise of clean energy and a healthier planet. There is also opportunity loss, where there can be rejection of certain good investments on political grounds, such as highly valuable aerospace and defense companies, which would be a good choice for the investor in other ways. Conservatives may reject health care companies that do not prohibit abortions or clean energy companies that claim to slow global warming. Politically-driven investors need to understand the financial costs of their political statements.

For the record, our firm, Kensington A.M.I. LLC is a politically neutral and culturally agnostic financial advisory. People of all political, religious and cultural backgrounds are welcome and are treated with equality, respect and dignity.  It’s really not that hard.