Magical Thinking and the Mythology of “Wealth Building” 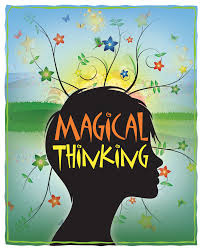 One can look pretty much anywhere on the internet or business media and find various “Wealth Building” schemes that offer financial independence and with it, the all of the associated dreams that can come true. Ostensibly, “wealth building” can be defined as the process of accumulating financial independence though one’s own efforts, usually over a rather long period of time. Wealth can be built through any number of legitimate means, from owning a successful business to acquiring and holding financial and/or real estate assets that appreciate over time.

Inheritance or other windfalls on the other hand, are not considered “wealth building”. Instead, they would be considered good fortune, where the beneficiary did little or nothing to acquire the wealth. The concept of wealth building therefore,  appeals particularly to the American sensibility, as it implies creation of wealth trough one’s own individual efforts within the free enterprise system.

The problem with popular notions of wealth building is of course, the innumerable scams that routinely make any number of false claims that lure the ever-gullible public into various forms of financial and entrepreneurial toxic waste that purport to deliver wealth and independence via some unique process, but invariably leads to financial loss and all the associated guilt and regret.

No matter how many times bogus “wealth building” scams are exposed, debunked and busted by the authorities, innumerable members of the public seem to learn little from past experience and are primed for the next purported shortcut to riches that crooked purveyors will invariably offer them.

In order for bogus “wealth building” schemes to succeed in recruiting ever more sucker-capitalists, a strong element of magical thinking is required. Magical thinking is defined by the all-knowing Wikipedia as:

“the attribution of causal or synchronistic relationships between actions and events which seemingly cannot be justified by reason and observation”.

In other words, you can get rich by some sort of magical process. It is exactly here  where legitimate wealth building is dissociated from all the various scams. When the acquisition of wealth becomes unconventional, unlike traditional methods and “special”, it departs from reality and magical thinking takes the would-be entrepreneur from the challenging and crowded road of wealth creation into the realm of financial magic.

For example, wealth building mongers offer a variety of get rich eventually schemes, from supposedly lucrative franchises, to start a new business gimmicks, work at home opportunities and certain dodgy multi-level marketing schemes are among the most common wealth building scams that often require eager would-be entrepreneurs to pay cash up front to get in on the game; cash they often never see again.

There are also countless investment-related wealth building scams that offer a vast junkyard of illusions that can take the form of penny stocks, gold and silver bullion promoted by doom-saying purveyors who continually warn of impending global financial collapse,  questionable real estate and raw land deals, bogus solar power and other alternate energy deals, traditional oil and gas partnerships, phony trinkets and collectibles deals as well as various other rubbish.

The unifying premise in all phony wealth building schemes is that you can somehow forego the usual long and difficult road of hard work, patience and sacrifice that usually comes with the territory of legitimate wealth creation, and by some miracle “build wealth'” quickly via some gimmick.

True and legitimate wealth building is by definition a long and often arduous construction project that requires the entrepreneur to work hard, be practical, invest a large amount of time and effort, and understanding business limitations in the real world; all while still thinking big and  believing that large scale success is eventually possible. Keeping one’s feet on the ground and avoiding the shortcuts of magical thinking is essential to the process of true wealth building.