3 Ways Transports Are a Leading Indicator

Going back in time around 18 months, trouble for stock prices began with the Transports Index, which led stock prices on the way down in this most recent decline which began in August of 2015. In period from January 19th to February 22nd 2016, however, Transports have led on the way up, even as most stocks were still going down. Though shipping, railroads, trucking and other transport companies benefit greatly from cheaper fuel, they seem to have found little added value in this particular cost cut as of now.

1-Shipping companies of all sorts only get orders when manufacturers, farmers miners and others actually sell something. This provides some of the best near-real time econometric data available.

2-Transports are huge buyers of aircraft, railroad locomotives and rolling stock, fleet automobiles and  trucks of all sizes as well as sea-going freight ships. Any new orders for these big ticket product-moving vehicles comprise a strong component of economic growth.

3-Transports deal in logistics, which is intrinsically labor-intensive. When transporters sense a slowdown, the entire national jobs environment is directly affected. When transports see an increase in traffic, new jobs can be created. 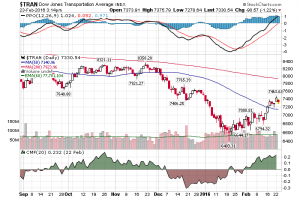