The Crash, Big Bounce and the Outlook for a Tricky 2016

Many global stock indexes have staged a strong recovery in the past few weeks as stresses in financial markets have been reduced. The grave concerns over global 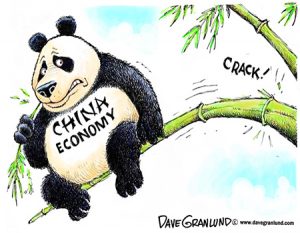 growth, especially in China, which so severely depressed markets in August and September have subsided, at least for now.

If stock traders and hedge fund operators were honest about the recent stock swoon and subsequent recovery, they would admit that the actual cause of the recent severe weakness in markets was caused not so much by macro-economic reality, but the shocking stock crash in the Shanghai market which began back in June. Shanghai stocks rallied some 130% between October of 2014 and June 2015, only to lose some 60% in a terrifying crash beginning on June 13th and apparently ending on August 27th. The stock crash panic spread thought the globe, causing traders to reprice most assets across the board and saw some of them attempt to recover losses by short selling indexes and ETFs. As the selling in Shanghai ceased in late August, collateral damage was assessed as many strategists predicted the onset of a new Bear Market. These grim predictions proved to signal a bottom in short term market sentiment. On October 1st, stock prices began an impressive rally, which as of November 3rd has erased the entire August-September correction. Many of the hedge fund short sellers were caught off side by the continuity of the rally, forcing further buying to cover short positions as stocks climbed throughout October.

The gyrations of stock prices notwithstanding, the outlook for the actual global and domestic economies is mixed at best. It’s not as if stock traders were in fear of nothing; China’s economy has slowed, while Brazil and Russia are in recession. Western Europe looks to be improving, though only modestly, while Japan is again attempting a reflation via monetary stimulus similar to the Fed’s policy  of “QE Quantitative Easing” (buying bonds with newly made money which pumps the new money into the financial system and hopefully into the real economy). Other central banks are also trying to goose their respective economies higher with monetary stimulus.

In the US, our economy has been growing but at a slowing pace as employment numbers have disappointed in the last two months and industrial production has lagged. The energy, mining, metals and materials sectors are in recession-like conditions, while auto manufacturing, biotechnology, information technology and aerospace are showing significant strength.

Corporate earnings are also mixed, as some companies, such as Apple have reported excellent earnings and revenue growth, while some industrials and other heavy industry companies reported rather poor results. The current P/E ratio for the S&P 500 is around a somewhat expensive 18 for this year, with an expectation of a recovery in earnings growth next year, which may justify current prices, at least for now.

The underlying cause for much of the global economic weakness has originated in weak commodities prices. The crash in energy, metals and materials has dragged down much of the global industrial base and sharply reduced business for key industrial companies. The decline in commodities may run its course in the next one to two years, allowing for investor expectations of an earnings and revenue recovery.

But weren’t lower fuel and lower input costs supposed to be simulative to consumer driven economies like the US? This was the thinking for a number of years (I admit I was a strong proponent of the benefits of lower commodities prices), but the benefits have not yet materialized, as higher costs for apartment rents and especially health insurance gobbled up any savings from cheaper gasoline (except California of course, where gas is still over $3 a gallon).

If commodity prices and corporate revenues can stabilize and grow in 2016, we may be able to rationalize a further advance in markets. This would require a bottoming in prices for key commodities and for renewed demand growth from China and other growth economies.

Our holdings have recovered along with markets and are in position for net asset growth in 2015; a prospect that seemed out of reach only a month ago. We are keeping the current strategy unchanged for the moment, but we may be more inclined to take profits toward year end if the global and US economic outlook does not show signs of improvement. This is a good example of how macro-economic analysis is applied to our investment strategy.

Another investment policy emphasis in 2016 will be in adding more dividend paying assets to portfolio holdings. Some quality blue chip companies offer good dividends and are still selling at lower prices even after this recent recovery. This portion of the strategy is taken from the Dividend Power portfolio, a new offering of Kensington A.M.I. One example is Indiana-based industrial engine maker Cummins, which pays a 3.6% dividend and has good growth prospects. This company is a leader in replacing dirty diesel engines with clean burning natural gas engines.

Overall, we can be grateful for the recent recovery and look forward to the prospect of posting a gain for 2015, while approaching 2016 with some cautious optimism.