We’ve all heard of illegal scams of every sort victimizing the pubic  in ways that break numerous Federal, State and International laws. But the most common and 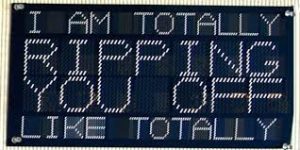 frequently occurring scams are not the illegal variety; they are the ones that comply with prevailing laws to the letter. These are the many perfectly legal scams that financial institutions, insurance companies and other interests have managed to promote through Federal and State government channels over a period of many years that have placed ordinary citizens and even many institutions in a position of some serious financial peril.

Among the most egregious and immoral of all legal scams are the quick cash type loans that often target low income households.  The companies that offer them make these predatory loans seem cheap and easy, but they charge borrowers usurious and unconscionable rates of interest, usually 99% per year, compounding to an estimated 341% over the life of the loan. For example, one California based lender offering a loan of $2,000 binds the borrower to 42 payments of $210, which total $8,820, or $6,820 in interest. [1] Adding insult to injury, this company charges an additional $76 “processing fee” on top of the outrageous interest charged. Most of this type of loan’s borrowers are low income persons who are financially unsophisticated, and think they have no other means of obtaining quick cash. Borrowers who miss payments can have their paychecks garnished are often subjected to strong arm type harassment via phone and letter. Before the days of financial deregulation, this sort of activity was called “loan sharking”.

Another form of legal scam is the payday loan, which is structured with the same level of  usurious and utterly immoral ultra high interest rates as the quick cash loan arrangement described above, but these loans are much shorter term, usually pledged against upcoming salary checks the borrower is due to earn. Repayment is made by automatic garnishments of paychecks with the addition of big interest rates charged by the lender, all with written permission by the borrower and generally, in compliance with state laws.

Moving up the food chain of legal scams, there are many perfectly legal financially based  deals that target the middle and upper middle classes.

One of the most promoted and widespread of the legal middle class scams is the full commission single premium Variable Annuity. These annuities are tax deferred insurance contracts that contain mutual funds that are subject to market value fluctuations. In time, the annuity owner can realize investment gains and dividend income accumulated in a tax deferred manner than is meant to be distributed at retirement. While the concept behind variable annuities is sound and legitimate, many of them are larded with huge upfront fees and commissions. Quite often, the fees and commissions paid to the selling agent and insurance company can total as much as 10% or more upfront, with sizable additional fees and commissions of some 2% per year. In addition there may be “caps” on market gains of the mutual funds in the annuity portfolio that can be partially confiscated by the insurer and or selling agent as part of the deal. All of this is completely legal.

Another perfectly legal scam is in the “alternative investment” arena, where people from the middle and even upper classes are solicited to buy private placement investments in such promising enterprises as green energy, advanced battery technology, real estate in exotic places like Belize and Costa Rica as well as other rather dodgy ventures. While some investments in these endeavors are legitimate, many contain assets of questionable value that have been advertized as potentially very lucrative. These deals are often garbage cans for near worthless assets that cannot be otherwise disposed of by sellers. Others just contain the improbable pipe dreams of many an over excited entrepreneur. All perfectly legal.

Other legal scams include TV coin sellers charging  several times the actual value of numismatic coins, embellishing their perceived value with folksy tales of cowboys buying whisky with silver dollars or pieces of eight once owned by pirates all selling at three or four or ten times their actual value. Perfectly legal.

Of course, there are many others, too numerous to list here.

Since the financial deregulation trend that began in the 1980s, every manner of predatory, overpriced hazardous and junky financial merchandise has found its way into the hands of the public in the US and increasingly internationally. It’s one thing when you’re ripped off by a criminal, where at least there is a sleazy law breaker to blame. But it’s quite another when  prevailing law facilitates and even encourages some rather unconscionable and immoral rip-offs that victimize our entire society.

More on scams to follow in the next installment of this series. .