C.P.I. Inflation Rates and the Real Cost of Living: Not the Same Thing

Each month, we hear about low inflation rates reported by the US Bureau of Labor Statistics. The BLS reports inflation is currently running at an annual rate of around 2%; 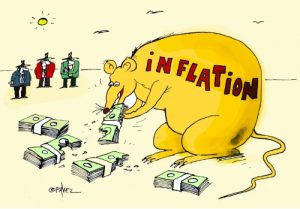 considered perhaps too low, according to some policy makers. Yet in the real world, it feels like the cost of living is going up very rapidly. This seeming dichotomy between Government economic reporting and real life experience has caused some considerable frustration for many Americans over the last several years. Perhaps some background would be helpful here.

First, “Inflation” and the increase in the cost of living are not exactly the same thing. Most people are not aware of this. Inflation at least in theory, measures the net increase in the supply of money, not the retail prices of essential goods or services. Inflation is supposed to measure the reduction in net purchasing power, which is a measurement of the buying power of money at any one moment, [1] which is not the same thing as the change in the cost of goods.

A simplified explanation of how The C.P.I. or Consumer Price Index is reported is from “a measure of the average change over time in the prices paid by urban consumers for a market basket of consumer goods and services [2]. The BLS uses this “market basket” of sample consumer items in various locations around the US which range from the cost of housing, food, utilities, fuel and other necessities, as well as apparel and other goods. The figures are then applied to a set of mathematical formulas to derive a net rate of change for the cost of the basket items. Sounds like it would make sense, but for many years the CPI seems to have understated the real life increase in the cost of living.

Anecdotally, for many people it feels like the cost of housing, food, gasoline and especially health care has accelerated very rapidly in the past few years, while the BLS is telling us inflation is at a very low level. We can measure the rather rapid increase in the cost of all of these essential items individually; and in fact they have increased in price much faster than the reported CPI. So how can this be?

First, the BLS is not trying to cover up or conceal anything; it is not a conspiracy or an attempt to intentionally deceive the public. It has to do with what has become a somewhat antiquated way of figuring the net CPI, a method that dates back to the middle of the last century. Without getting overly complicated, the problem likely is within the price referencing mechanism, which is used to compare prices of basket items month to month, seems to have lost its correlation to the change in real world prices. New factors such as on line shopping, frequent spikes in food and fuel prices, price gouging in certain items and other distortions are not well tracked by CPI. There is also the question of “weighting” as in how much emphasis is placed on any one set of goods versus the other. The cost of health care for example is probably quite underweighted as opposed to say the cost of a pair of jeans of the price of a PC.