Income Gap: An Economic and Moral Dilemma, But Nothing New

Among the more popular headlines we’re reading lately are about the rather discouraging level of income disparity we’re seeing between educated, mostly urban high 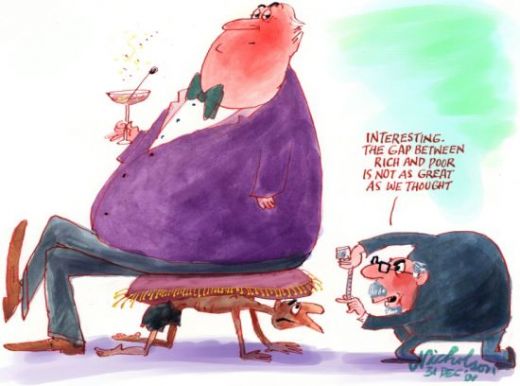 income earners and the huge class of lower paid hourly workers across America that have been seemingly left behind as the US economy has recovered in the last few years.

There is no denying that working class people have been struggling in recent times, while a comparatively smaller group of high income earners made significant income gains. However, this inequality is nothing new; the US has been here before. Some historical context and verifiable data may be worth a look when examining this question of income disparity.

Many of us are familiar with the post Civil War era “Gilded Age”, where a relative handful of industrialists pocketed much of national income, while common workers toiled for long hours for meager pay and no benefits. Conditions for workers were far more difficult then, as labor unions and other worker advocacy organizations were only in their formative stages at the time and had little bargaining power. Women, children and minorities were routinely exploited. Mass immigration, mostly from Europe, kept wages low, and employers pressed their advantage.

In their 2003 report published in the Quarterly Journal of Economics, Emmanuel. Saez of the University of California Berkeley and Thomas Piketty of the Paris School of Economics submitted “Income Inequality in the US 1913-1998”, [1] which indicated that the top 1% of income earners took 15% of total earned income in 1921, but by 1929, just before the stock market crash, the top 1% had already increased their take to near 20% of income. But after the onset of the Great Depression, the take of the top 1% began a long downward trend that did not bottom until the mid 1980s at around 7% of income. In the period following 1985, the top 1% began to gain again, reaching some 17% of income in 2005 according to Saez and Piketty. The uptrend in the income of the 1% is still in place to this day, although we might see a top in that figure soon.

There have likely been earlier periods of income inequality in US, but data on income comparisons was not routinely recorded until around 1870.[2] The Westward expansion of the early 19th century was probably also a time of substantial income disparity in the established Eastern states, as numerous Americans abandoned their homes in search of better opportunity out West, implying scarce job opportunities in a largely agrarian early American economy.

Income inequality has been a part of American life since before the formation of the Republic, and a way of life in most market driven economies around the world since antiquity. Whether we are willing to continue to tolerate income inequality in the 21st century is the moral and economic dilemma we now face. More on this important topic to follow.

1-Saez and Piketty; Quarterly Journal of Economics; 2003
2-Us Department of Commerce 2013